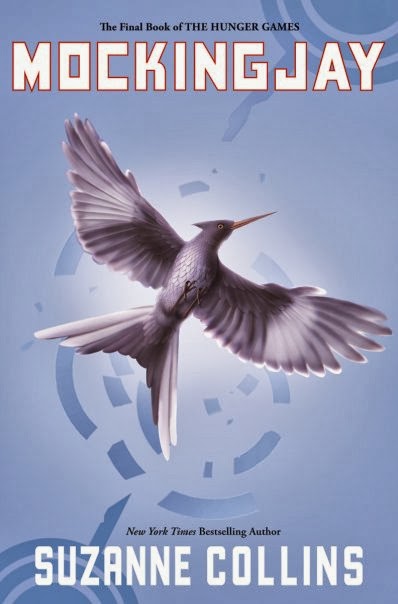 Sorry I haven't been posting as often recently.


Katniss Everdeen, girl on fire, has survived the 75th Hunger Games. Peeta has been captured by the Capitol.  District twelve has been destroyed, but thankfully Gale has escaped and  Katniss's family is safe.  They are living in District 13, which really does exist. There are rebels,  new leaders, and a revolution is unfolding.

It is by design that Katniss was rescued from the arena in the cruel and haunting Quarter Quell, and it is by design that she has long been part of the revolution without knowing it. District 13 has come out of the shadows and is plotting to overthrow the Capitol. Everyone, it seems, has had a hand in the carefully laid plans -- except Katniss.
The success of the rebellion hinges on Katniss's willingness to be a pawn, to accept responsibility for countless lives, and to change the course of the future of Panem. To do this, she must put aside her feelings of anger and distrust. She must become the rebels' Mockingjay -- no matter what the personal cost.


I wasn't looking forward to reading this book. I knew certain characters were going to die and didn't want to go through that emotional trauma. Tip: if you never want to learn spoilers to books and movies, then do not have a Pinterest account.

She is traumatized by her life in the arena, confused about her personal feelings for Peeta and Gale, and haunted by the presence of blood and roses. It was difficult to read her like this. She wasn't the same clear-headed huntress that I've grown to know.

But you see, that's the thing. Who could go through all the circumstances she's been through and not be changed? It wouldn't be realistic (or humane) for her to be completely unscathed by her experiences. I mean, come one! She's murdered innocent people to save her own skin! Who wouldn't be conflicted and mortified after doing these things? Well, ruthless villains wouldn't, obviously (*cough cough* Snow) ...but that's besides the point.

So on top of Katniss being mentally unstable and whatnot, Peeta has been 'hijacked'. The Capitol went in his head and twisted certain memories.

I'm not going to say any more on that subject...

Overall, this book was just really depressing. The ending was beautiful, but sad, and made me want to curl up in a ball and cry. I've heard various peoples' opinions on it. Some people say it's an amazing book, while other people say it was a bad ending for a trilogy of such epic books. Personally, I think it was just right. Of course it was depressing, but it wouldn't be realistic if it ended with "and they all lived happily ever after". That's just not how life goes - especially a life full of death and war.

So, yes. This book was a sorrowful ending to the trilogy, but I think it was the right ending and applaud Suzanne Collins for her marvelous works of epicness.


41/2 stars
I know what your thinking, but there was just one characters death that I think was unnecessary and that lost part of the point of the book for me.