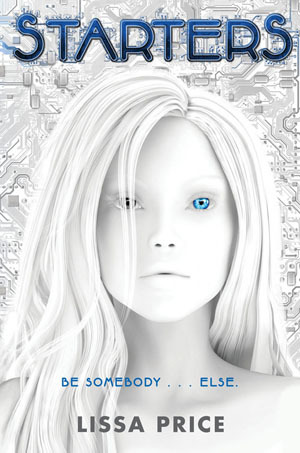 Callie Woodland lives in a futuristic Beverly Hills. Her brother is sick, she's too young to be employed, and they're both unclaimed minors hiding from marshals. The only way Callie can make money is to sell her body for periods of time.

You see, a company called Prime Destinations developed a way to give the elderly a chance to be young again. A way for the old and invalid to do things they might other-wise never have been able to. Sky-diving, snowboarding, racing!

Basically, they get put into the teenagers' bodies.Can anyone say creepy?

So, Callie, with no where else to go, signs the contract with Prime destinations. Then, something causes her to wake up during one of her rentals and she finds herself tangled in a messy scheme that will most likely end with her being killed.

This book looked really interesting when I picked it up. Distopians are what I seem to be most interested in lately, and this looked like it'd be cool, so I was like 'why not?'.

Plot-line: Pretty well done. I didn't feel dropped into a wad of futuristic terms and complexity, so it was easy to understand what was going on. The over-all idea of the book was cool. I mean, people who know how to put other older people into kids' bodies? Neat idea!

The beginning is slow and took a little getting used to. Callie goes to Prime and decides to go through with renting out her body. She gets a complete make-over, complete with laser treatments. She's insured, of course, and the renter is under a strict 'no doing dangerous things that could harm your rental and no sex' rule. So, what could possibly go wrong? Ha.

The middle is where something goes wrong. During her third rental, Callie wakes up. She receives a cryptic message telling her that, for her own safety, she mustn't go back to Prime. She listens and proceeds to live like she's her renter.

The end was probably the best part of the book. I was actually mildly surprised!

Characters: Hollow. Even the Callie, who should be the most fleshed-out character, was hard to relate to. It was all so messy. For example: I think there's supposed to be a love triangle, but you can't really tell because their emotions aren't portrayed well. Oh, and the Old Man (villain) wasn't...well, scary or threatening. Just mysterious and strange. Personally, I like a villain I can hate, and I can't say I hated the Old Man. I can't say I have any connection at all to any of the characters. It was disappointing.