Ranger's Apprentice: Book 1 The Ruins of Gorlan by John Flanagan 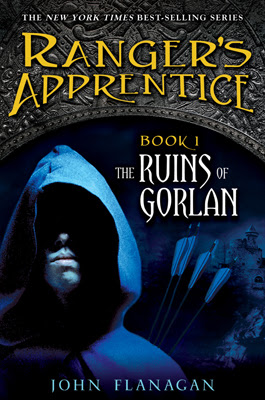 I initially read this to preview it for my 12-year-old brother because it was in the YA section and not in the younger section. Just in case, you know?

(From Goodreads)
They have always scared him in the past — the Rangers, with their dark cloaks and shadowy ways. The villagers believe the Rangers practice magic that makes them invisible to ordinary people. And now 15-year-old Will, always small for his age, has been chosen as a Ranger's apprentice. What he doesn't yet realize is that the Rangers are the protectors of the kingdom. Highly trained in the skills of battle and surveillance, they fight the battles before the battles reach the people. And as Will is about to learn, there is a large battle brewing. The exiled Morgarath, Lord of the Mountains of Rain and Night, is gathering his forces for an attack on the kingdom. This time, he will not be denied....

This book is a well-written adventure that was a fast read (for me) and very enjoyable. My expectation: A boy with superb skills  is trained as a ranger and probably ends up saving someone's life. Reality: A boy with superb skills goes through long, hard training with a serious mentor, the dangerous enemy is about to start a war, and the boy saves more than one life. It was a slow read, not exactly 'gripping', but was written well enough to keep my attention. I think boys probably would enjoy this more than I did, but it does work for a fast, easy read :)


4 Stars (if it grabbed my attention more, it would have been 5)