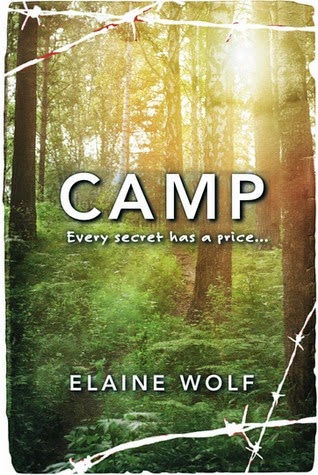 
A coming-of-age novel about bullying, family relationships, and the collateral damage of secrets.

Every secret has a price.

For most girls, sleep away camp is great fun. But for Amy Becker, it’s a nightmare. Amy, whose home life is in turmoil, is sent to Camp Takawanda for Girls for the first time as a teenager. Although Amy despises spending summers at home with her German-immigrant mother, who is unduly harsh with Amy’s autistic younger brother, Amy is less than thrilled about going away to camp. At Takawanda she is subjected to a humiliating “initiation” and to relentless bullying by the ringleader of the senior campers. As Amy struggles to stop the mean girls from tormenting her, she becomes more confident. But then her cousin reveals dark secrets about Amy’s mother’s past, setting in motion a tragic event that changes Amy and her family forever.

CAMP is a compelling family drama that will resonate with teen and adult readers. It will be a strong addition to recommended reading and summer reading lists, and it is appropriate for anti-bullying programs. Mostly, though, CAMP is a mother-daughter story for mothers and daughters to share.

Perfect for all book groups.

I wasn't sure what to expect when I dove into the world of Camp. For one, I've never been to a sleep-away camp. Blame it on being homeschooled if you want, but the whole "staying-with-a-bunch-of-people-I-don"t-even-know-for-the-whole-summer" thing seems pretty daunting, even though I'm probably one of the most people-person persons you may ever have the chance of meeting.

Let me tell you a thing.

This book shovels up the gritty truth of growing up and overcoming the obstacles in a life that is stock full of them. I admit that at first I marveled at the horrible actions of some of the characters. Do people really act like that? I wondered. How can anyone be so cruel and power hungry? How can a mother not see when her child is suffering?

I guess I've been taking for granted the life I have. Sure, sometimes my parents don't seem to understand me. Sure, I've participated in teen drama. And sure, I might get the feeling someone doesn't like me.

But some people have it SO much worse.

Now, you may be thinking "Um, it's a book. Those aren't real people and real situations".

You're correct. No matter how much life we pump into fictional characters, there's just no possible way for them to lift of the pages and become a living, fleshly thing. There might not be anyone in this world who have had a life as trialing as Amy Becker's, but I refuse to believe that.


I know the Mrs.Wolf and her publishers agreed that this book is appropriate for ages 12 and up, but with the uncomfortable sexual references and brief scenes I would only recommend this to a VERY mature 12-year-old who's parents said it was okay. I am not personally acquainted with any such 12-year-old, so my recommended age would be:

And I give this book:

NOW FOR THE BEST PART.

I recently joined a teen book club being held at my local library. Our book for the month of June was Camp by Elaine Wolf... and my club had the privilege of Skyping with Mrs. Wolf!

I was pretty darn excited, to say the least. On the way to the meeting I jotted down some writing questions I had for her and was completely satisfied with her answers.

(Note: These are not Elaine Wolf's actual words, just her advice to me written from the memories in my head and the notes on my paper)

What advice could you give about time management, especially directed toward teens who are in school and have responsibilities within their home?

Use your weekends. (I think I forgot to mention I was homeschooled...) focus on school during the week and writing on the weekends.

When working on a novel, try to accomplish two keep-able pages per day.

Another tip she had was to write the first paragraph of any story/chapter by hand.

How can someone with no experience of being bullied (in love, having cancer, etc.) be able to write those scenes and emotions in depth?

Anything you read, hear, see - it's yours to use.

Go out and "borrow" people's experiences.

Question #3
Were you ever worried about people being offended by the sexual content in Camp? Where is the line between addressing a subject and going too far?
I remember her smiling at this.
Writing Camp, she never worried "am I going too far?". The story grew very organically and fleshed itself out as she wrote. Some schools have told her that they would love to put Camp on their reading lists, but were worried that parents would be against it. My parents would probably be against me reading it, if I were younger. I hope that schools can get this book on their lists, and that kids can share it and their thoughts with their parents.
~
And a big "thank you" to Mrs. Wolf for bearing with my questions and encouraging me on my journey as a young writer. You were very inspiring to talk to :)